Avoid Termination Blunders: How to Fire an Employee Legally & Fairly 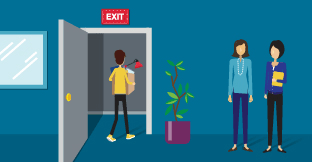 Be confident when handling employee discipline and termination with HR101 Courses

Establishing the necessary groundwork is critical when taking disciplinary action, and especially before firing an employee. An unfair or poorly handled termination could put your business at significant risk and legal liability.

I have an employee who was out for the full 12 weeks on FMLA leave. He hasn’t returned to work after the 12 weeks. Can I fire him?

This is a tricky one. The laws are very complex. Let me give you an example. If the employee is out on leave because of a medical condition, he may be covered under the Americans with Disabilities Act. If that’s the case, he may be legally eligible for an extended amount of leave – even more than the 12 weeks allowed under the FMLA. In other words, ADA may kick in after FMLA leave. Before terminating any employee on medical leave – or any other legally protected leave – it’s always recommended that you consult with an HR expert or an employment law attorney.

I’m still confused about how long I have to keep Form I-9 on file after an employee leaves the company. What are the guidelines?

I have an older customer service rep being rude to customers. Age has nothing to do with it but I’m thinking of replacing her. How do I protect the company?

Documentation is the key here. This is a good time for progressive discipline. If she’s received a verbal warning, the next step is a written warning. Include all details of the incidents and give clear objectives for improvement. In the warning, let her know one more infraction will be cause for further discipline, up to and including termination. One more thing – consistency is important. If any other employees have had instances of being rude to customers, you need to treat this employee the exact same way you treated previous violators.

Can I fire someone who is leaving soon anyway?

I would not recommend that you fire someone who has given notice. If work has slacked off since they gave notice, you can ask them nicely if they would prefer to leave earlier. Make it their choice. If they decide to stay with your company until their agreed-upon departure date, encourage them to get their work done in a timely manner. Maybe have regular transition meetings to discuss their workload. But don’t terminate them early if you can help it. This can make an employee really angry and that can lead to a lawsuit – even if it’s unwarranted. Like I said in the presentation, many ex-employees seek legal counsel simply because they felt disrespected. And then the attorney discovers a separate reason to file suit.

Do I always have to use progressive discipline? Can’t I terminate employees immediately?

If we’re facing a layoff, how do I decide which employees to let go?

It’s tough to decide which employees to layoff. In the easiest situations, the decision is based on the work you’re eliminating. For example, if a particular business unit or product line is being shut down, it’s pretty obvious which employees will be let go. However, in most layoff situations, employers have to reduce headcount among surviving teams. In any case, you must base your decision on selection criteria that can stand up to legal challenge in the event of wrongful termination claims. Your criteria should be based on objective factors, like elimination of non-essential positions or elimination of certain categories of employees – like temporary, part-time or contract workers. You could also base it on something like seniority … last in, first out. Or even eliminate those with pre-existing disciplinary action. Whatever way you go, it’s important to document your decision and back it up with documentation showing why certain employees met the criteria and others didn’t.

Documentation explaining why you took the action you did. If you have clear documentation that you warned an employee about a situation and the employee did not meet your objectives for improvement … that can really help your defense. But your documentation can’t be contradicted by other records. For example, if you say in your warning that performance has been unsatisfactory over the past three months but the employee had a satisfactory performance review two months ago, that’s a big problem. The other thing you have to worry about is consistency. If you discipline one account manager for being late but not others, that shows favoritism. Similar employees must be treated in a similar manner.

I have an employee who received a written warning. I said that we would meet again in a month to review her performance. But she’s not meeting expectations. I’d like to let her go now. Can I do that?

Unless it’s something serious, I would wait until the time stated in the warning. The exception would be if there was some sort of language in the written notice that discipline may be enforced earlier if performance doesn’t show improvement. If you said in the document that the month was for her to show improvement, you should give her the full month.

Not specifically – only sex is covered in Title VII although some federal circuits have allowed sexual orientation to go through under sex and some have said no because it is not explicitly stated in Title VII. Supreme Court has not stepped in and resolved the conflict between the circuits, which it could do. But many states and cities have explicitly added these classes to their list of protected classes.

What if we don’t specify “how many” write-ups you need to get fired?

Consider being more specific in your policies but even if you say three write-ups for example, still leave yourself some room for flexibility. Remember not all violations will have the same severity. For example, a person being late could warrant several write-ups before termination. Whereas, theft or violence, for example, you may want to terminate immediately without prior write-ups. The key is to be consistent as much as possible. If you give one person three warnings for example, for being late, make sure you give all your employees three warnings for being late. Employees who feel like they have been treated fairly and professionally are less likely to seek legal recourse.

Take control of employee discipline with the Progressive Discipline Smart App. This web-based app will serve as your guide to building a consistent documentation process that enables you to have smarter, more constructive conversations with all employees.