Creating a job listing is one of the first steps in any hiring process. Done well, this posting will highlight the necessary qualifications for the job, including experience, education and skills. Done poorly, however, it may include discriminatory language that could create legal issues before you even contact candidates.

Due to two new Supreme Court rulings in June 2020, it’s important to carefully review your hiring tools and procedures to avoid any legal missteps, including potentially discriminatory job postings. The first Supreme Court ruling protects LGBTQ individuals from sex-based employment discrimination under existing federal law, while the other blocks any attempts to end the DACA (Deferred Action for Childhood Arrivals) program, therefore allowing immigrants brought to the U.S. as children (also known as “Dreamers”) to obtain work authorization.

As a foundation, Title VII under the Civil Rights Act of 1964 states that employers with 15 or more employees can’t discriminate or harass in the workplace on the basis of certain legally protected characteristics. Between this and other federal discrimination laws, you cannot exercise any type of preference or bias based on these protected classes. If your job advertisement isn’t worded properly, you may imply bias without even realizing it.

Here are some things to consider with each protected class:

If you use inappropriate language in your job listing, you could be guilty of discrimination without even realizing it.

Beyond these federal laws, it’s important to check your own state’s laws as some states offer protection against discrimination based on marital status, criminal history, political affiliations and other factors. State laws may also be stricter and affect businesses with fewer employees than federal laws.

When in doubt, always ask yourself: Is this specification absolutely necessary for the job? If the answer is no, it doesn’t belong in the job posting.

Because smart, non-discriminatory hiring begins before the interview, it makes sense to look at your job listings and job applications. Are they working in your favor, or are they potential liabilities? With the attorney-approved Job Application Smart App from HRdirect, you can take an important step toward strengthening your non-discriminatory hiring practices. The attorney-developed online application only contains legally permitted questions, so you can be confident you’re in compliance with the most current federal and state hiring laws. 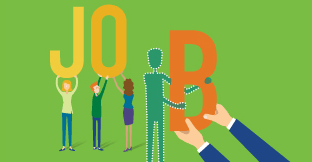